Who is Tulsa County: A Data Dive 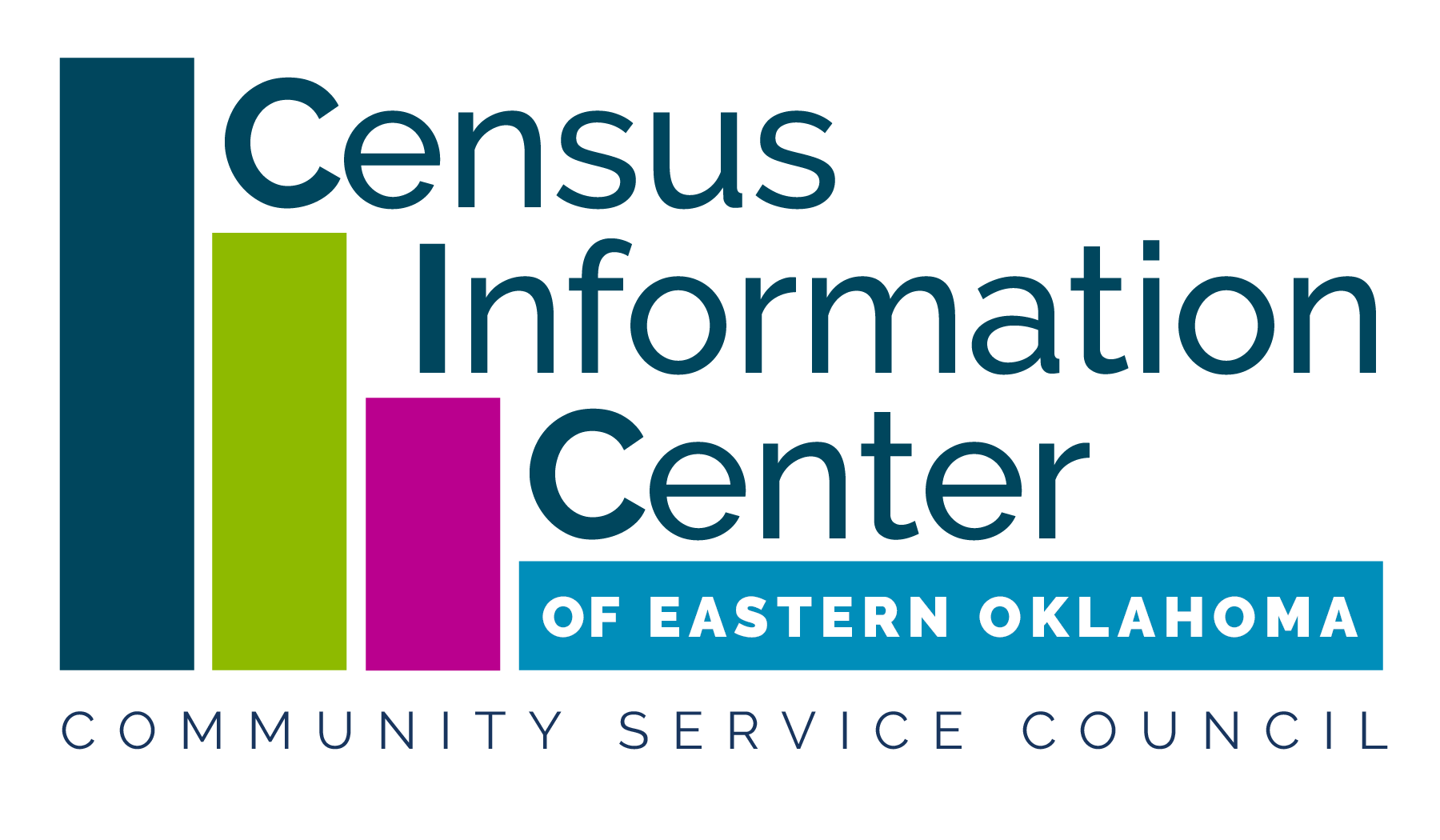 The Community Service Council is a designated Census Information Center (CIC) in partnership with the U.S. Census Bureau. The goal of CICs across the country is to provide local access, education, and technical assistance for communities on using Census Bureau data for planning and decision-making. Every year, CSC’s Census Information Center of Eastern Oklahoma publishes the Tulsa Community Profile, a robust data report that highlights demographic trends and tracks data around key areas for community well-being, such as economic opportunity, education, housing and health. The following dashboard features key data from the 2021 Tulsa County Community Profile. More data and details are available by viewing and/or downloading the full report.

Please note that some data are only available at the state level. The data on this page are for Tulsa County unless otherwise noted. Click on the graphics to enlarge them for readability.
This webpage features the 2021 Community Profile for Tulsa County. Please visit our main page for additional and archived data reports (csctulsa.org/census). 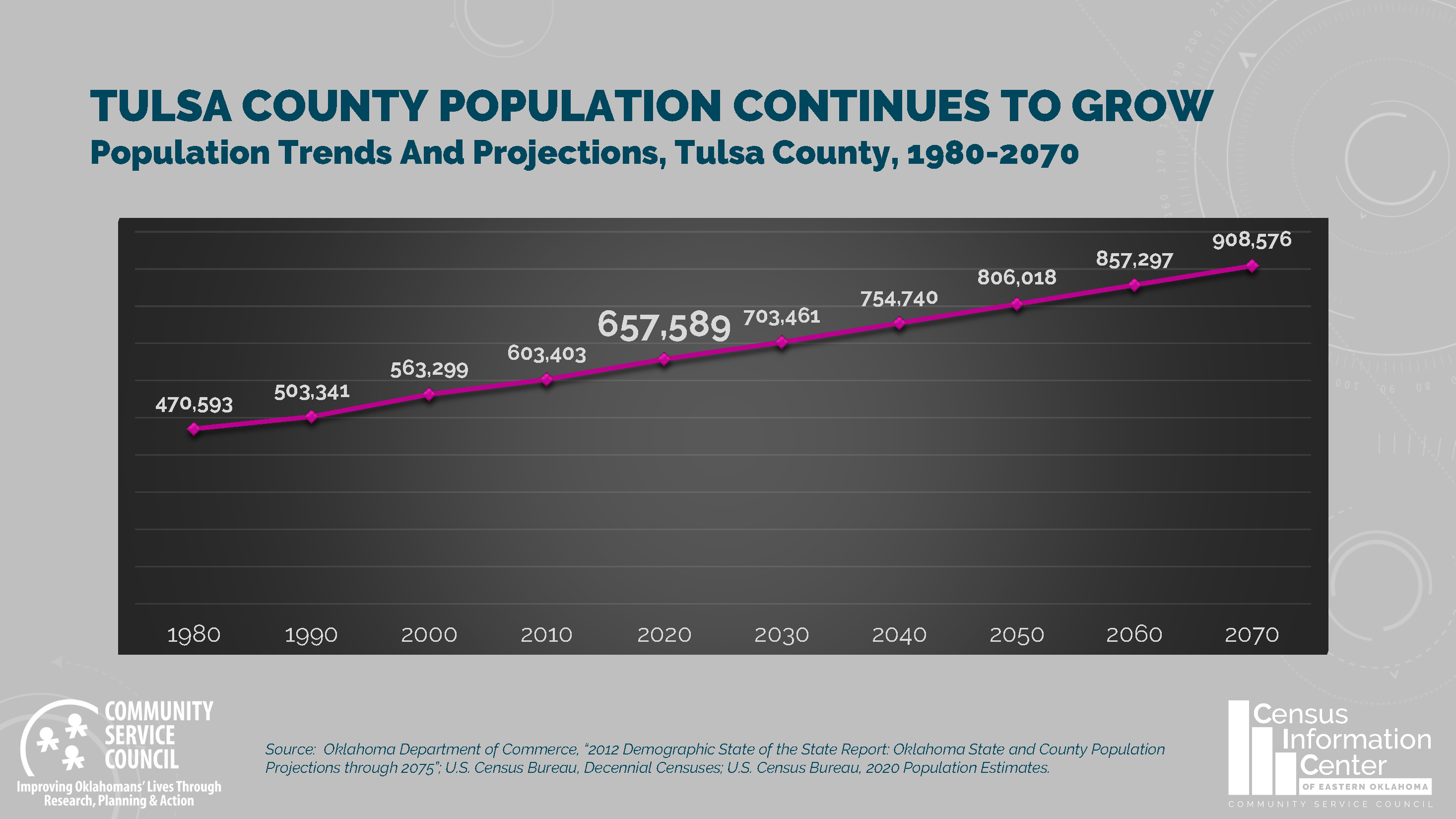 POPULATION HAS GROWN OLDER OVER THE DECADES 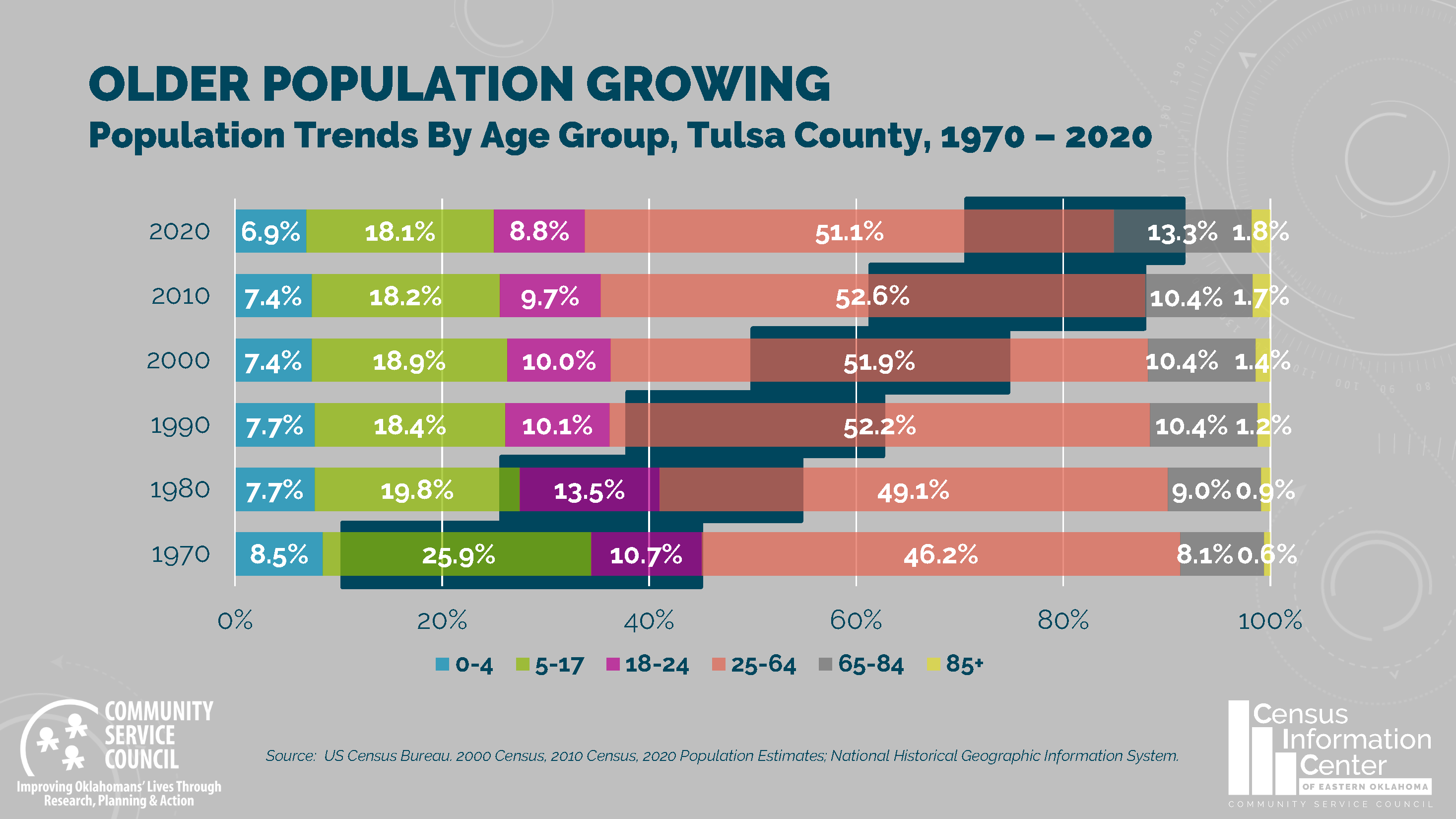 POPULATION INCREASE DUE TO MINORITY GROWTH 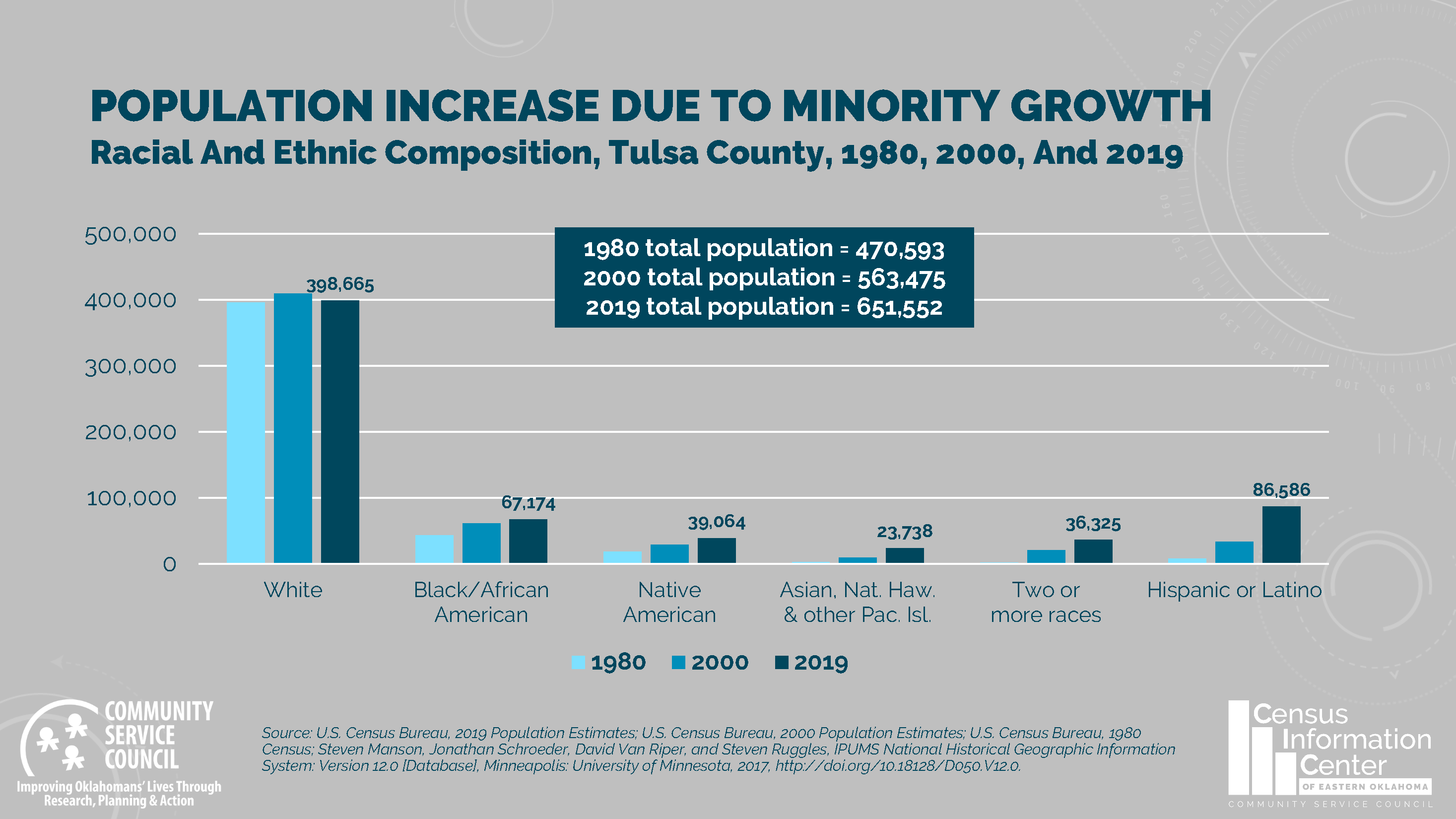 Between 1980 – 2019, overall population increased by 38% primarily due to growth in non-White populations. 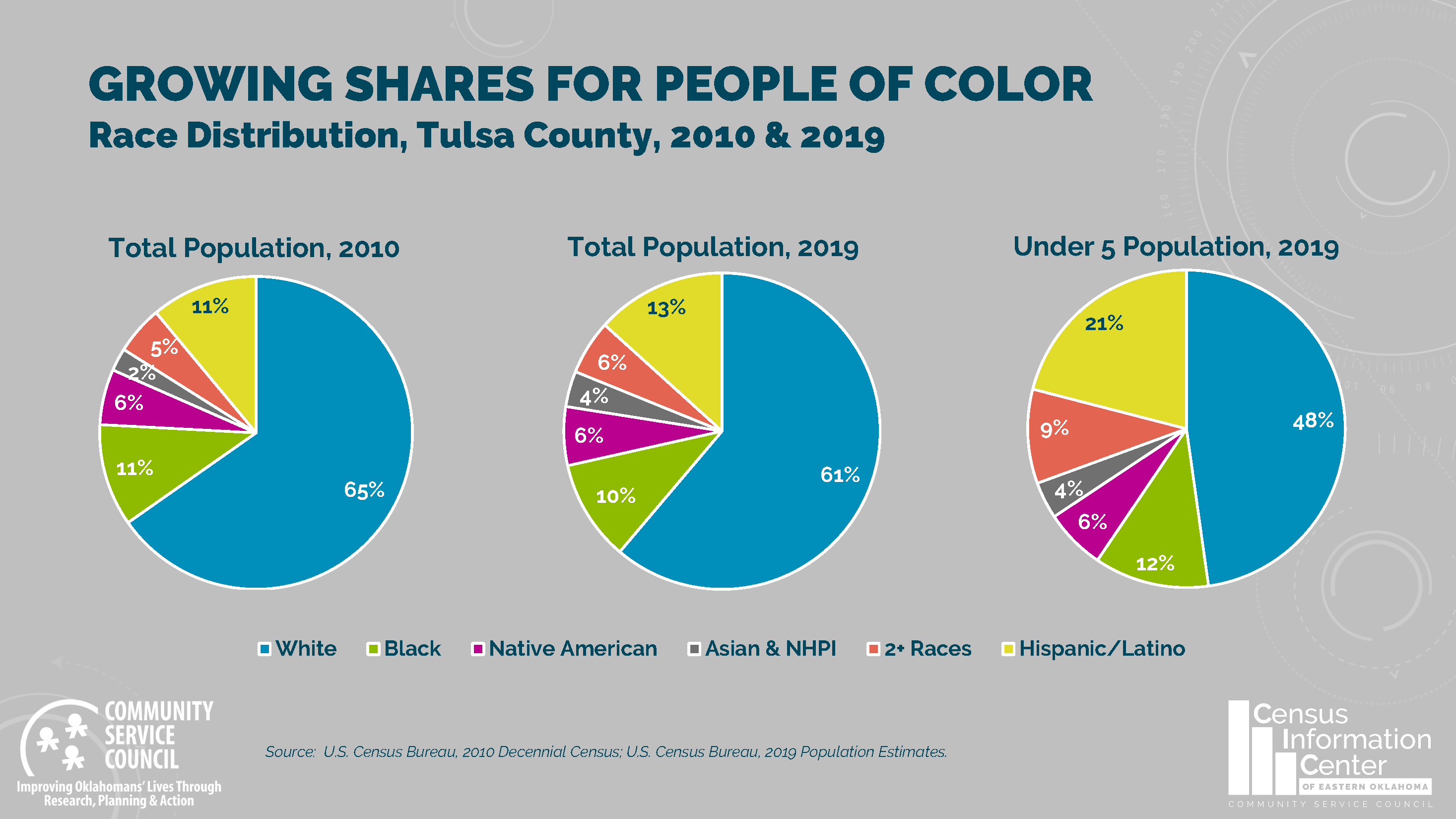 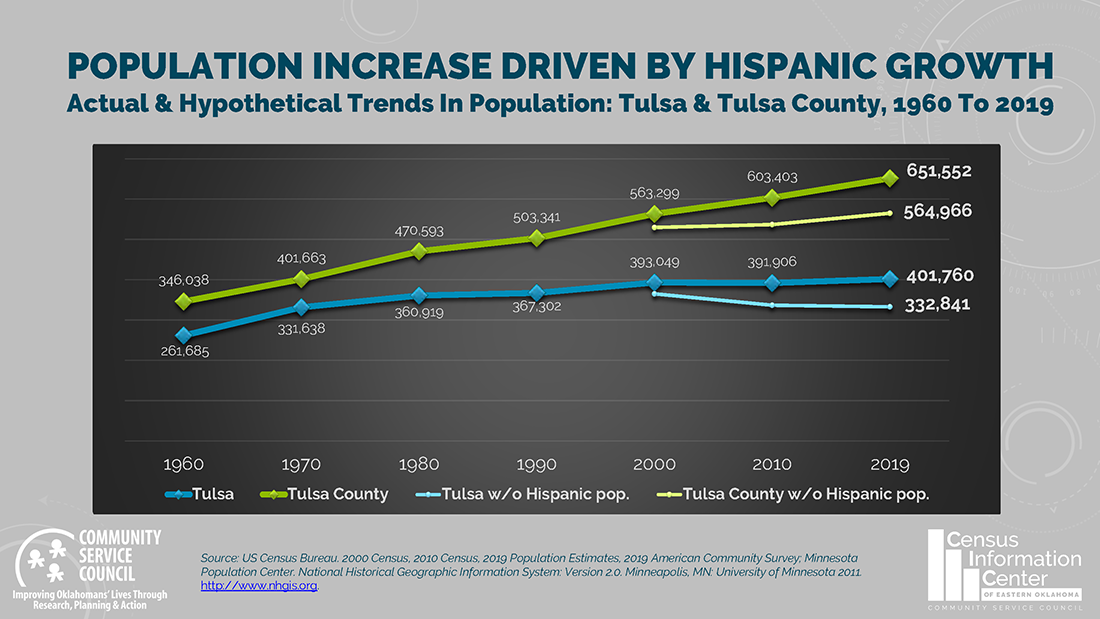 Were it not for the growth in the Hispanic population, Tulsa County would have about 90,000 fewer residents. 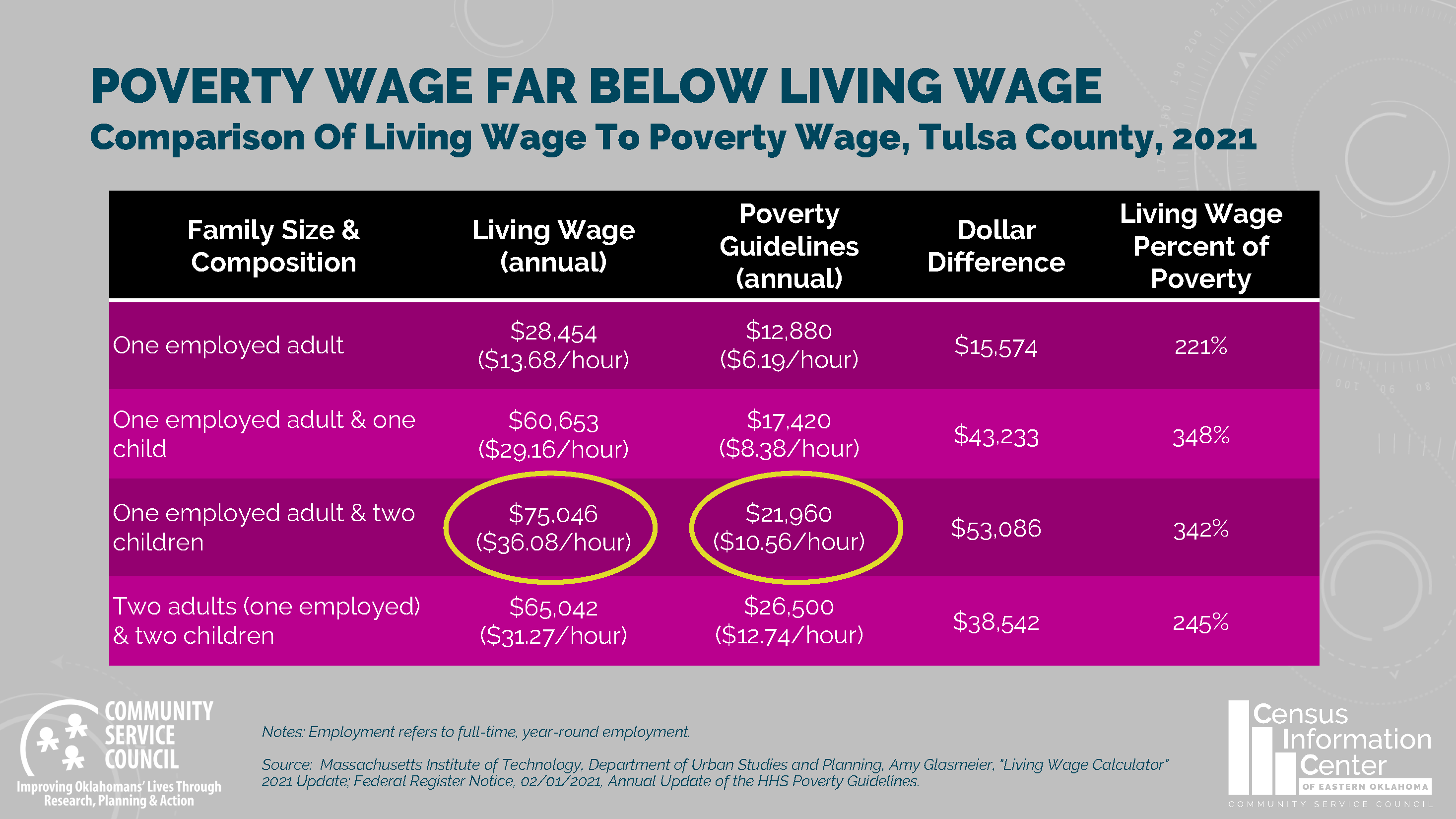 The dollar amount associated with the poverty level falls substantially short of what is required to meet a family’s basic needs. 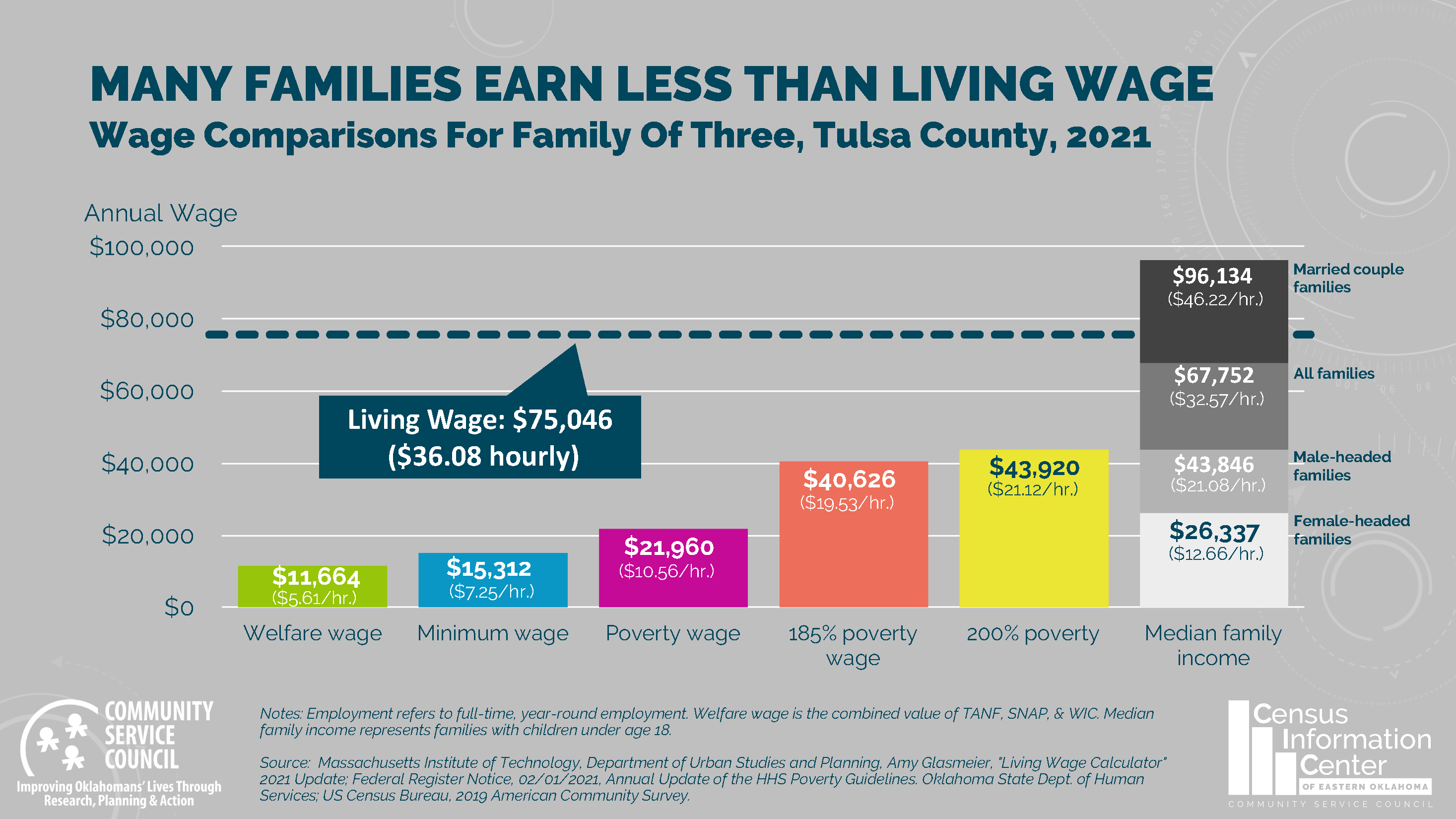 The average Tulsa family with children earns nearly $10,000 less than living wage, which is annual wages required to be self-sufficient.

NOTHING TO SPARE FOR FAMILY EARNING LIVING WAGE 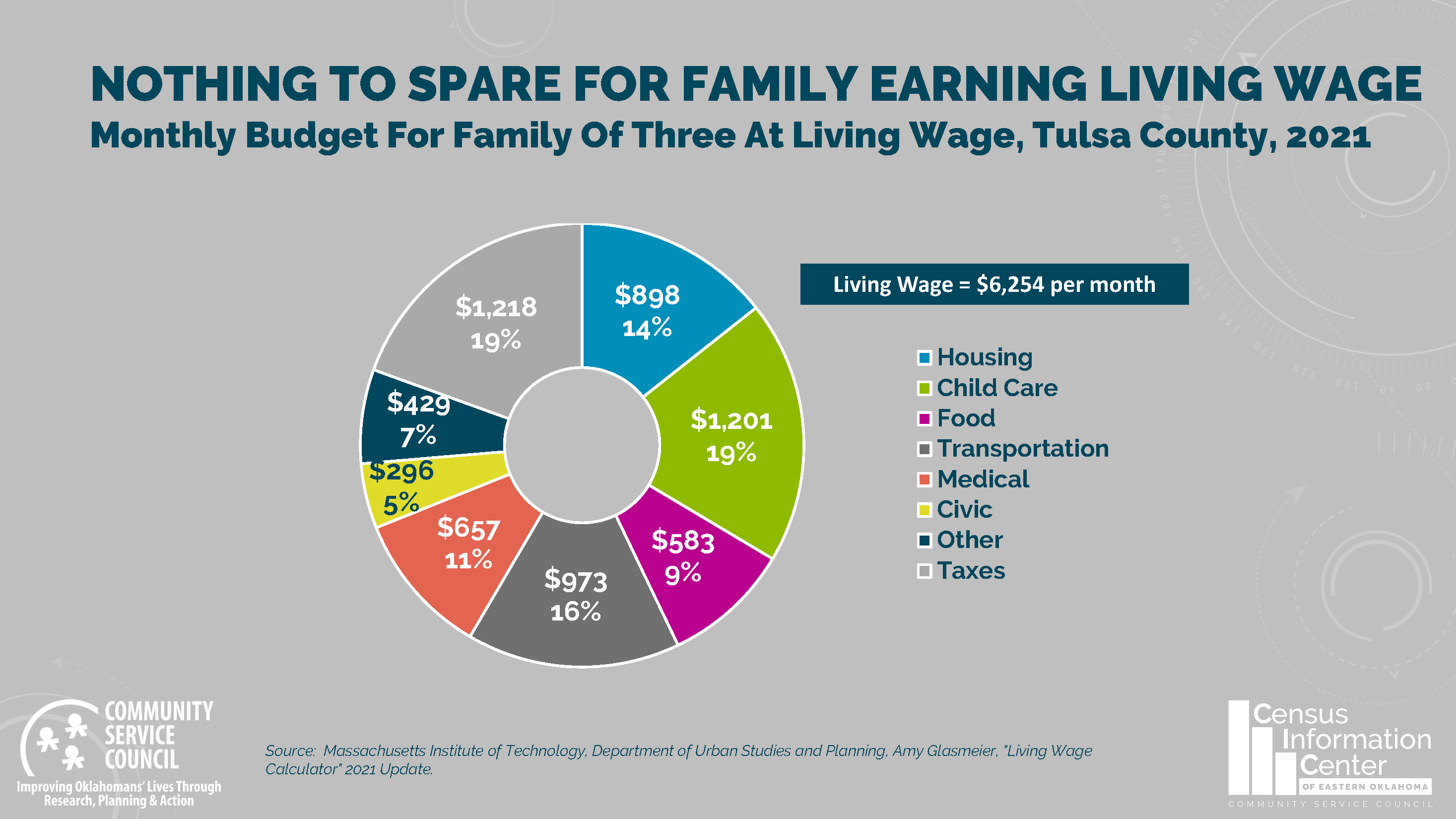 To be self-sufficient, a typical Tulsa County family of three would need to earn $6,254 per month. This is a modest budget.

CHILDREN MOST IMPACTED BY LOW WAGES

MANY FEMALE-HEADED FAMILIES IN CRISIS 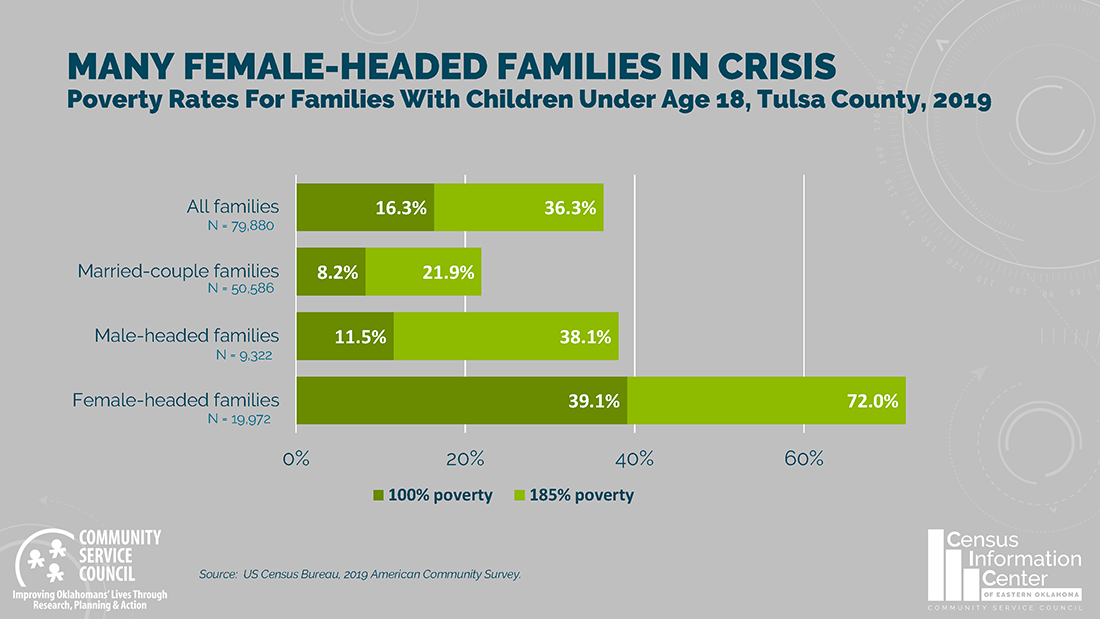 Female-headed families with children are the poorest of all family types, with 39% living below the poverty line, and nearly 75% living below 185% of poverty.

MOST TULSA COUNTY RESIDENTS ARE EMPLOYED 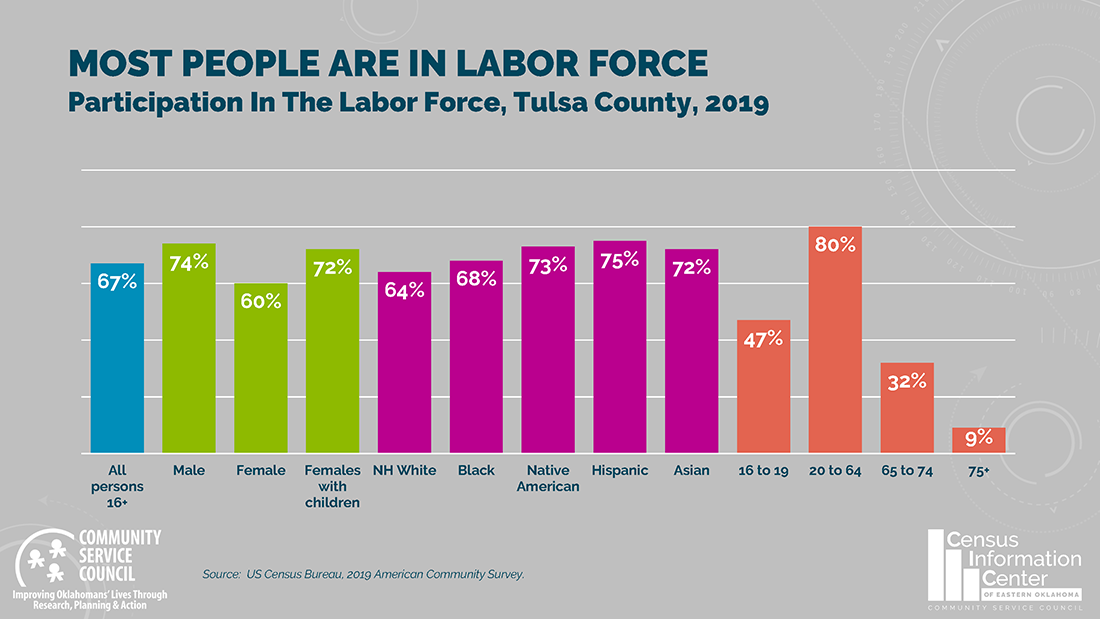 UNEMPLOYMENT RATES FALLING PRIOR TO COVID 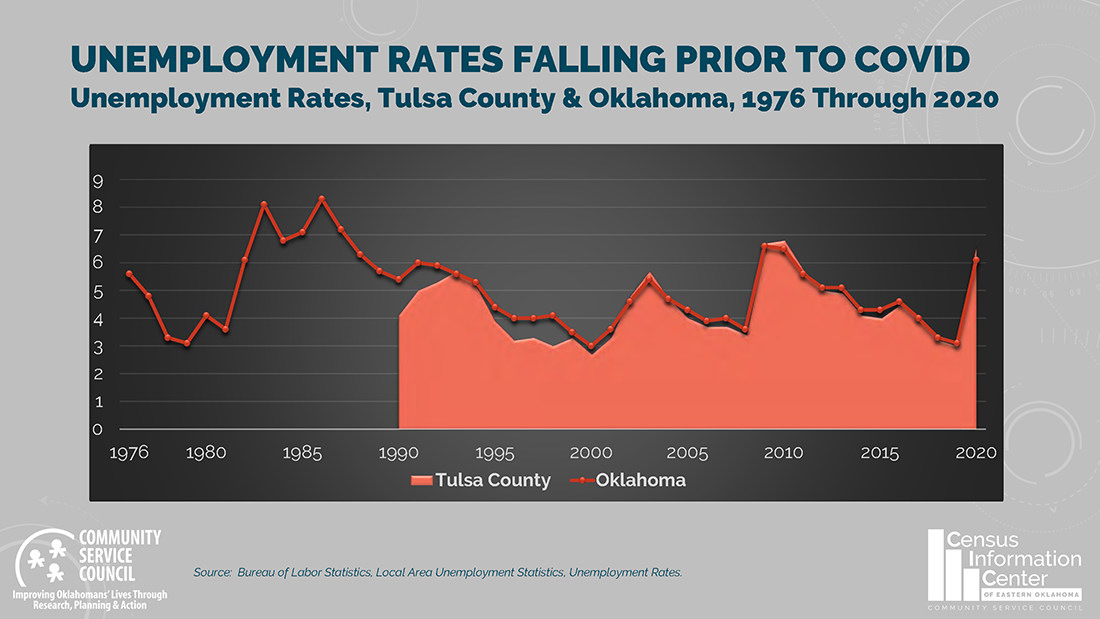 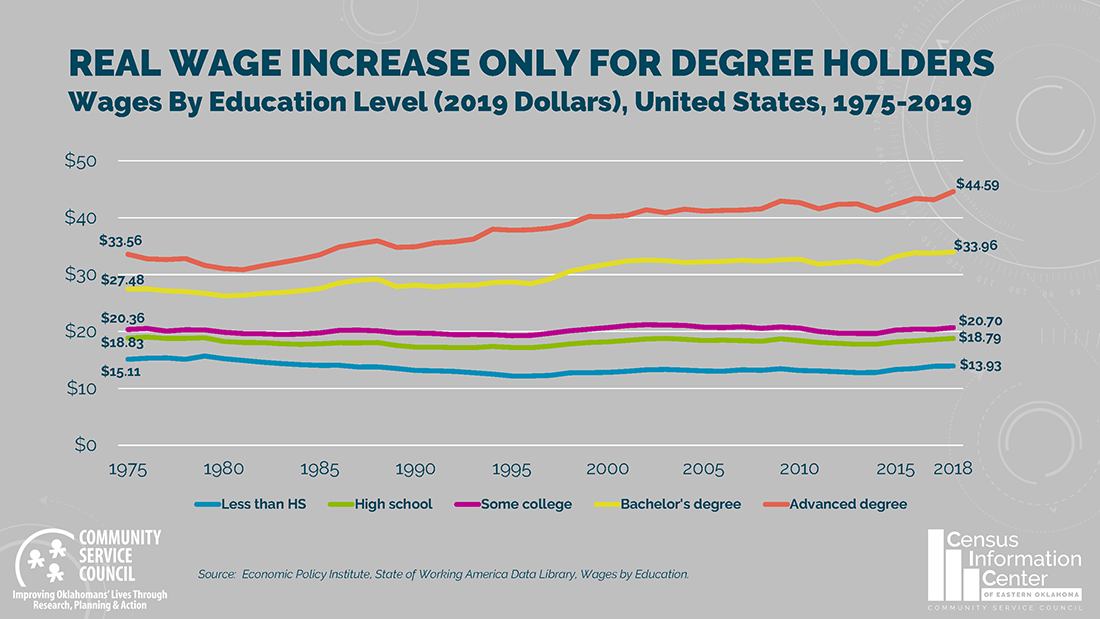 Since 1975, for persons without a college degree or high school diploma, wages have remained basically unchanged or have fallen.

FOUR OUT OF TEN HAVE EARNED COLLEGE DEGREE 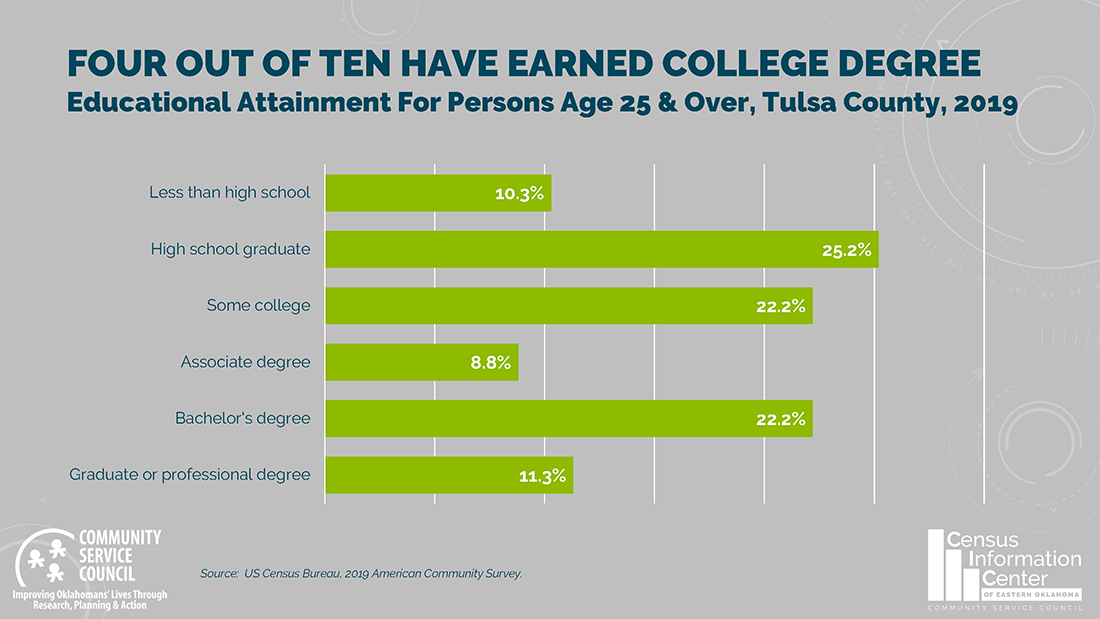 25.6% of Oklahoma residents have earned a bachelor’s degree or higher, ranking the state among the 10 least educated in the U.S.

MANY RELY ON ASSISTANCE FOR BASIC NEEDS 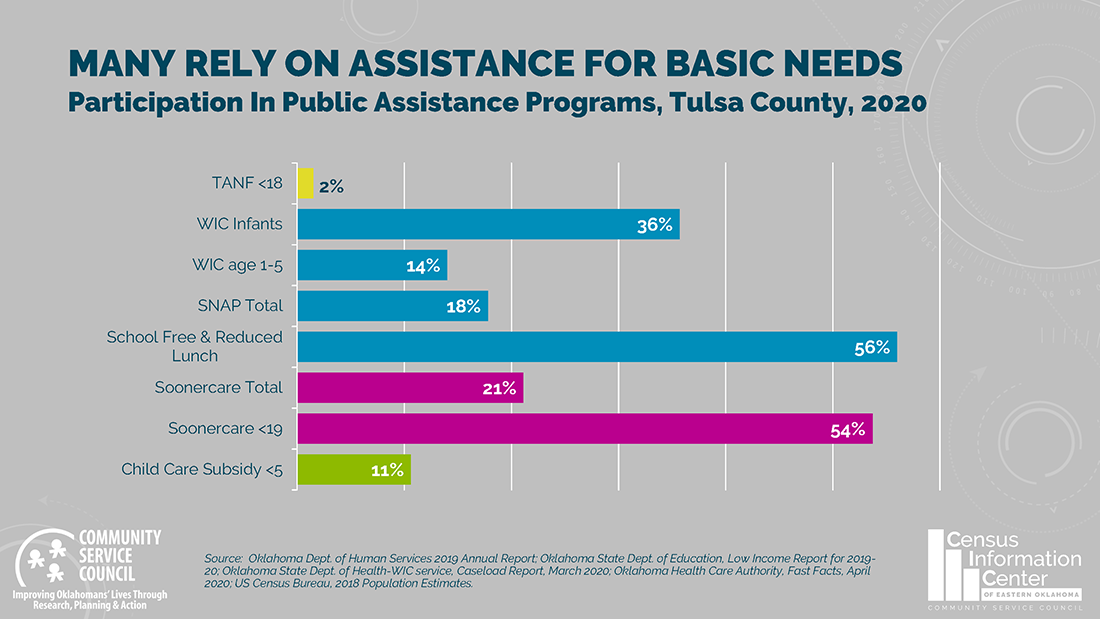 Many families are unable to make ends meet with their current income and must rely on public assistance programs. 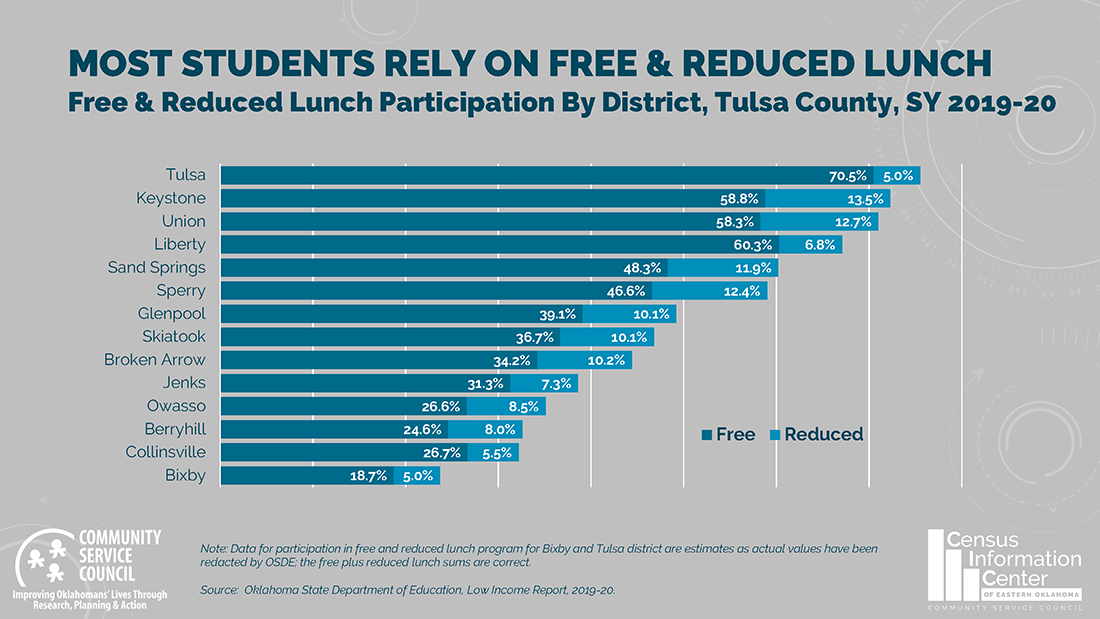 A growing number and percentage of students participate in school free and reduced lunch programs.

MANY CHILDREN NOT ATTENDING PUBLIC PRE-K 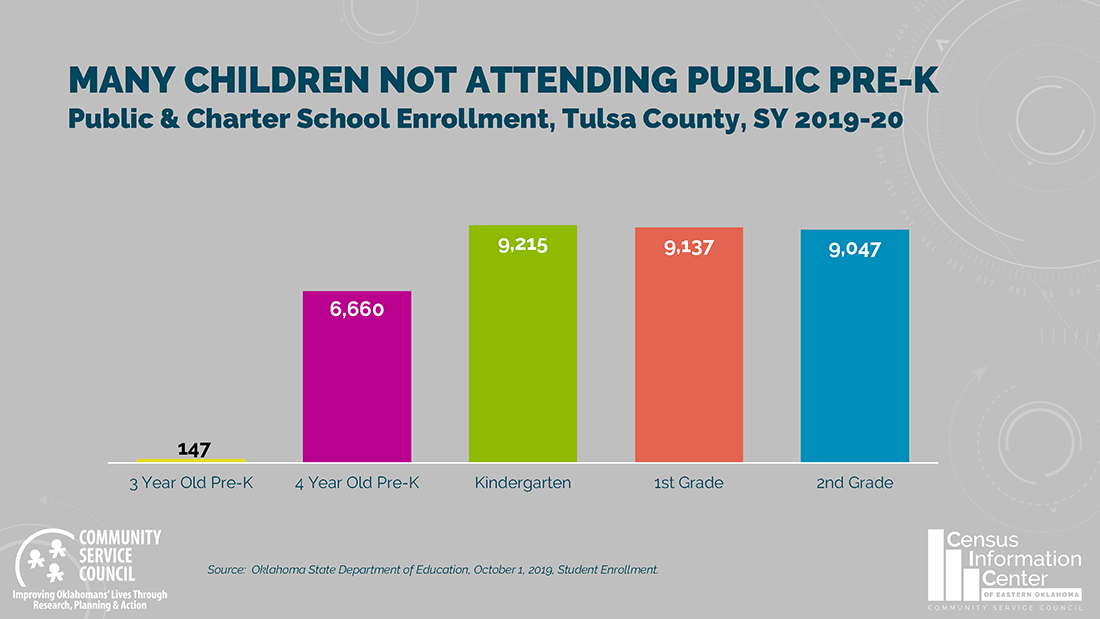 The number of children enrolled in public Pre-K programs has been increasing every year but still falls short of the number attending Kindergarten.

MOST THIRD GRADERS NOT PROFICIENT IN ELA 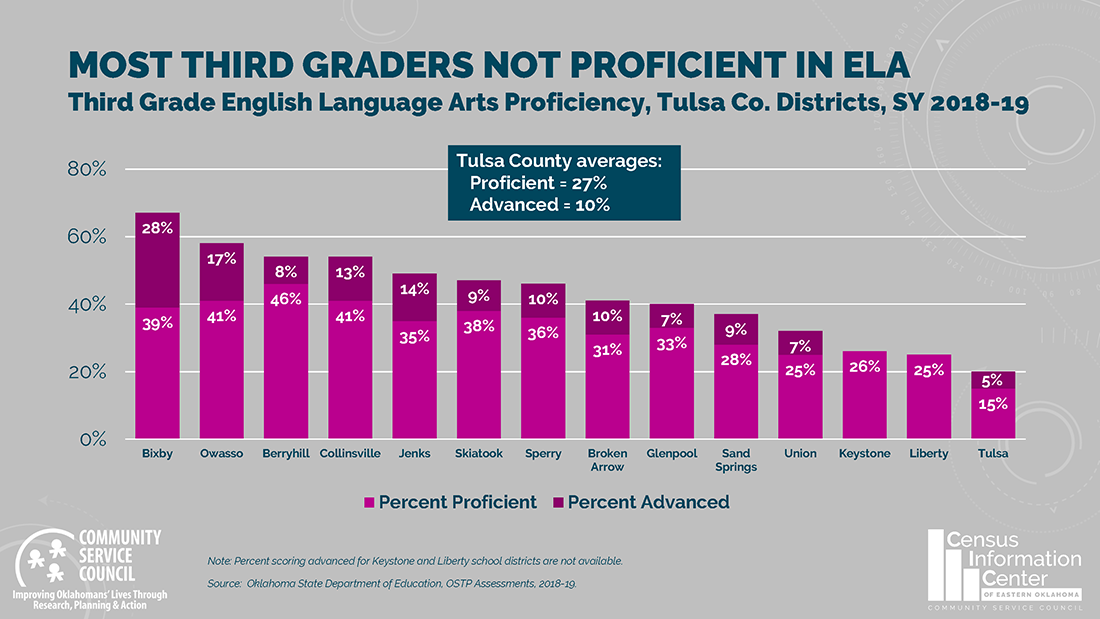 Only four of 14 school districts report at least 50% of students scored proficient or advanced on the 3rd grade reading/ELA assessment.

OKLHOMA REMAINS ONE OF UNHEALTHIEST STATES 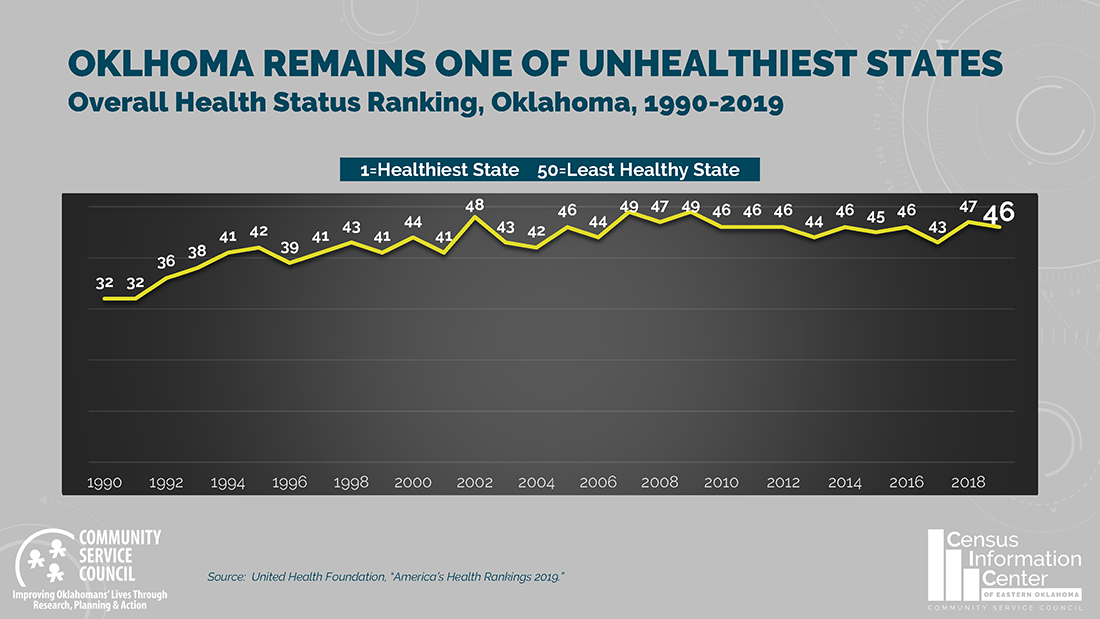 In 2019, Oklahoma ranks 46 out of 50 in overall health. Only Mississippi, Louisiana, Arkansas and Alabama are ranked less healthy. 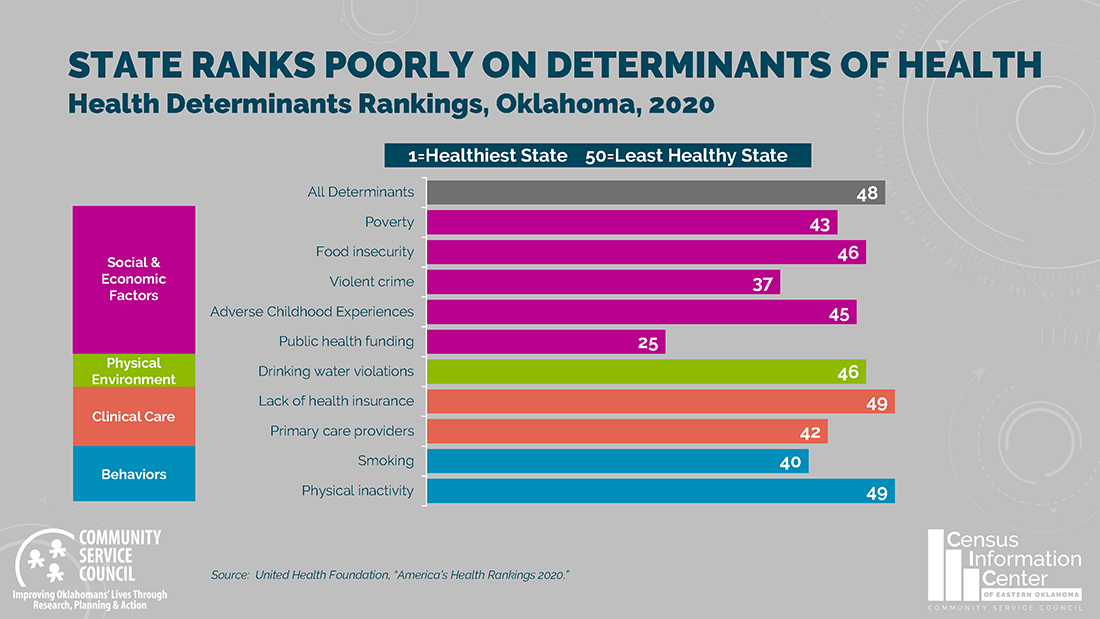 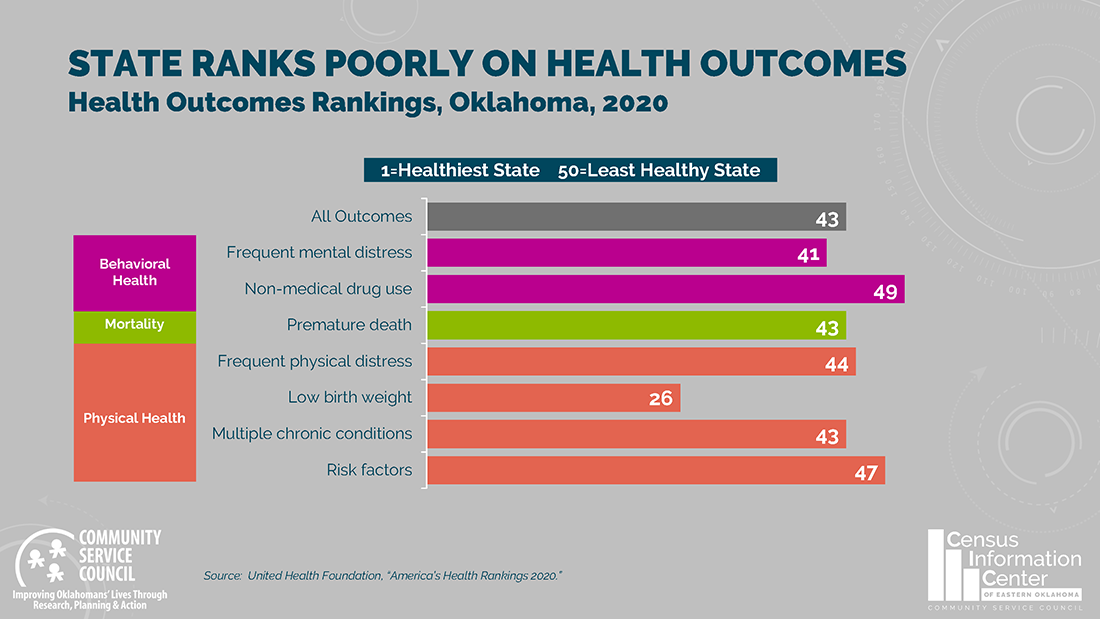 Oklahoma measures among the 10 unhealthiest states for behavioral health, mortality, and physical health. 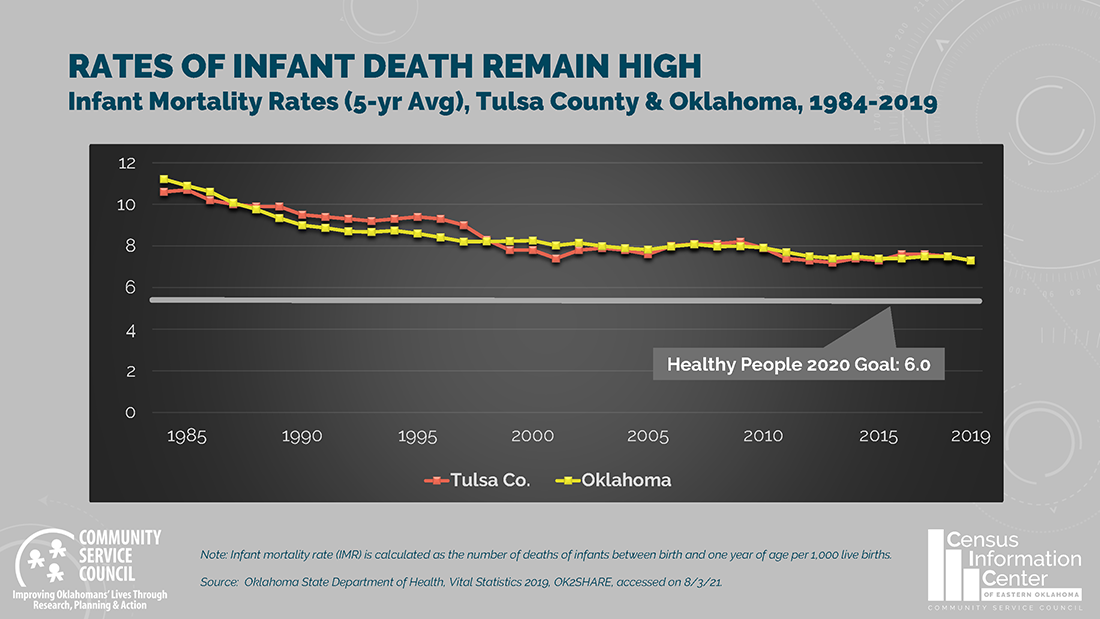 The infant mortality rate for African American residents is triple that of Whites, and double that of Native Americans and Hispanics. 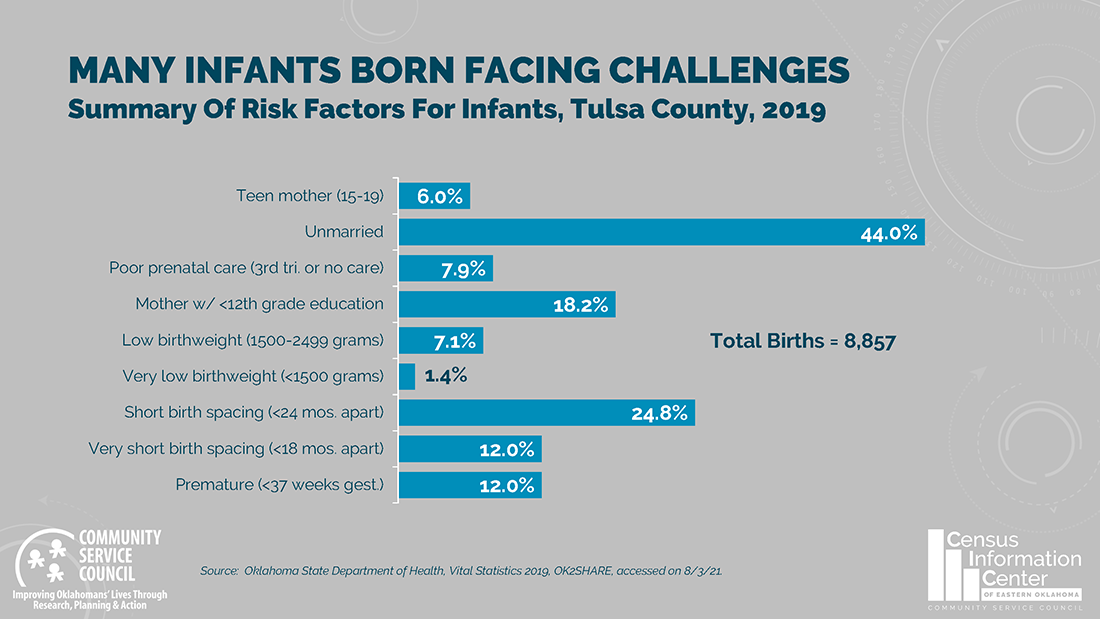 In 2019, 12% of births were premature and 7.1% were of low birthweight, both of which can lead to health and developmental complications. 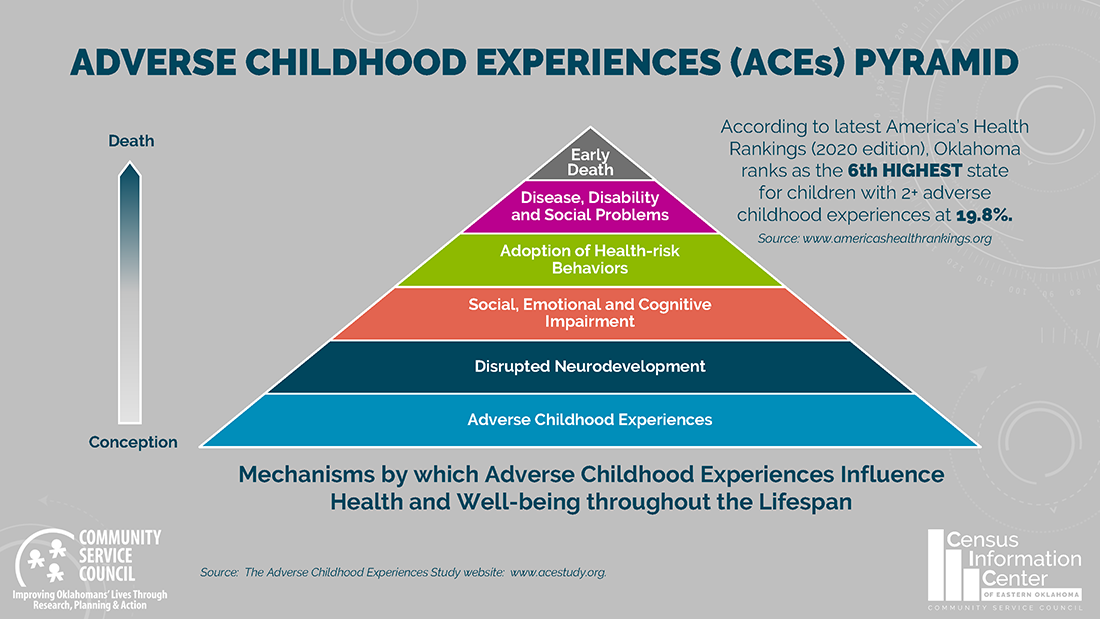 Oklahoma has one of the highest rates of occurrence of ACEs, which is a model for understanding the impact of childhood trauma.