The City University of New York’s Institute for State and Local Governance (CUNY ISLG) developed the original methodology for creating and implementing Equality Indicator tools; this methodology was replicated and customized for Tulsa.

With guidance from CUNY ISLG, a series of seven Community Service Council (CSC) and City-led community feedback sessions was conducted over three days in August 2017 in six different locations in north, south, east, west and downtown Tulsa. There was a combined total attendance of 159 residents. The community feedback sessions were designed to be an open-forum for discussion about equality issues in Tulsa. Participants were invited to share their opinions on topics relevant to the Tulsa area, and ideas were captured by CSC and CUNY ISLG staff and compiled after the events.

CSC also conducted an online survey in 2017 to collect opinions about issues of inequality in Tulsa. Invitations to complete the online survey went out to several thousand people through various digital avenues. The survey was open for six weeks and received 259 responses. The community feedback sessions and the online opinion survey provided a combined total of 396 unique suggestions for possible indicators in addition to broad feedback about themes, topics and groups.
All public feedback was collected and organized to shape the initial framework for Tulsa Equality Indicators. Indicators were then carefully selected based on the quality and availability of data. In order to be eligible for inclusion in Tulsa Equality Indicators, the data had to meet several criteria:
1) Quantitative as opposed to qualitative;
2) Available for Tulsa at the city or county geographic level;
3) Be disaggregated by subgroups for comparison;
4) Updated annually; and
5) Be available from reliable sources such as the U.S. Census Bureau or the State Department of Health.

For each indicator, the Equality Indicators methodology measures disparities between two groups, and this disparity measure serves as a proxy for inequalities experienced by many groups in Tulsa. The majority of the indicators reflect a comparison between the most and least disadvantaged groups on that particular measure. All but four of Tulsa’s indicators compare opportunities and outcomes for populations disaggregated by: Age, Education Level, English Proficiency, Gender, Income Level, Mode of Transportation, Disability Status, Race, Veteran Status, Geography/Location.

Each of the 54 indicators makes a comparison between two groups of people who are, generally, the most and least disadvantaged for a given issue, yielding ratios used to describe the severity of disparity between the two groups. Each theme is divided into three topics and each topic is divided again into three indicators, producing nine indicators per theme. The uniform number of indicators per topic and per theme ensures that each indicator, topic and theme carries equal weight in calculating the overall city score.

The set of 54 indicators originally selected as well as the set used in subsequent reports are not meant to be comprehensive collections of all inequities in Tulsa, but are rather proxies for the range of disparate outcomes and opportunities experienced by Tulsa’s disadvantaged populations.

The data for most of the indicators come from publicly available sources, ranging from government agencies to U.S. Census Bureau surveys, but some data were provided by request. Annually collected data are used to score the indicators. Tracking these measures from year to year enables progress to be assessed at regular intervals. The most recently available data at the time of data collection are used, however, that year is not uniform across sources. The data source listed on the individual equality indicator tables indicates only the most recent data used. For complete list of all data sources and years used, please visit the SOURCES page.

How Information is Reported

The Tulsa Equality Indicators tool can score each indicator in two ways: a static score for each year, and a score measuring change from the baseline. As described by CUNY ISLG, there are two primary benefits to scoring. First, it allows for different types of data using different metrics to be reported in a standard way. Second, scoring allows for findings to be aggregated to produce results at successively higher levels.

Static Scores
All 54 indicators are reported as ratios that reflect a comparison of outcomes for two groups—generally the most and least disadvantaged for a given indicator. Ratios are converted to scores using the scoring system developed by CUNY ISLG. Higher ratios correspond to greater disparity and lower scores. For instance, a ratio of 1:1 indicates equality, while a ratio of 5:1 indicates that a group is five times as likely to experience a particular outcome.

Static scores at higher levels are produced by averaging the scores one level below them. This means that static topic scores equal the average of their three indicators’ scores and static theme scores equal the average of their three topics’ scores. The six themes are averaged to produce the static citywide score each year. Each indicator, topic and theme, as well as the city, is scored from 1 to 100, with 1 being the highest possible inequality and 100 being the highest possible equality.

Change Scores
Change scores at each level are calculated by subtracting the baseline year’s score from the current year’s score, and can reflect positive change (represented by a positive number), negative change (a negative number), or no change (score of 0). The Equality Indicators tool can measure the amount of change in the level of disparity, but it cannot attribute that change to any specific policy or practice without extensive research and evaluation beyond the scope of this tool.

Changes in outcomes may not be notable from one year to the next. This is because change tends to happen incrementally and over a longer period of time. Changes in outcomes are also not reflected in real time, because many data sources are updated on a delayed timeline. Change scores reported this year may reflect changes that actually occurred two or three years ago, and may not always align with what residents are currently experiencing. Data years for all indicators in this report are included along with the findings.

Indicator-Level Ratio-to-Score Conversion Table created and provided to Tulsa Equality Indicators by the City University of New York Institute for State and Local Governance. Once a ratio has been obtained, the score corresponding to that ratio is identified. Changes are more difficult to achieve as ratios approach 1; thus, the closer a ratio is to 1, the smaller the change in ratio is needed to move up or down a score. 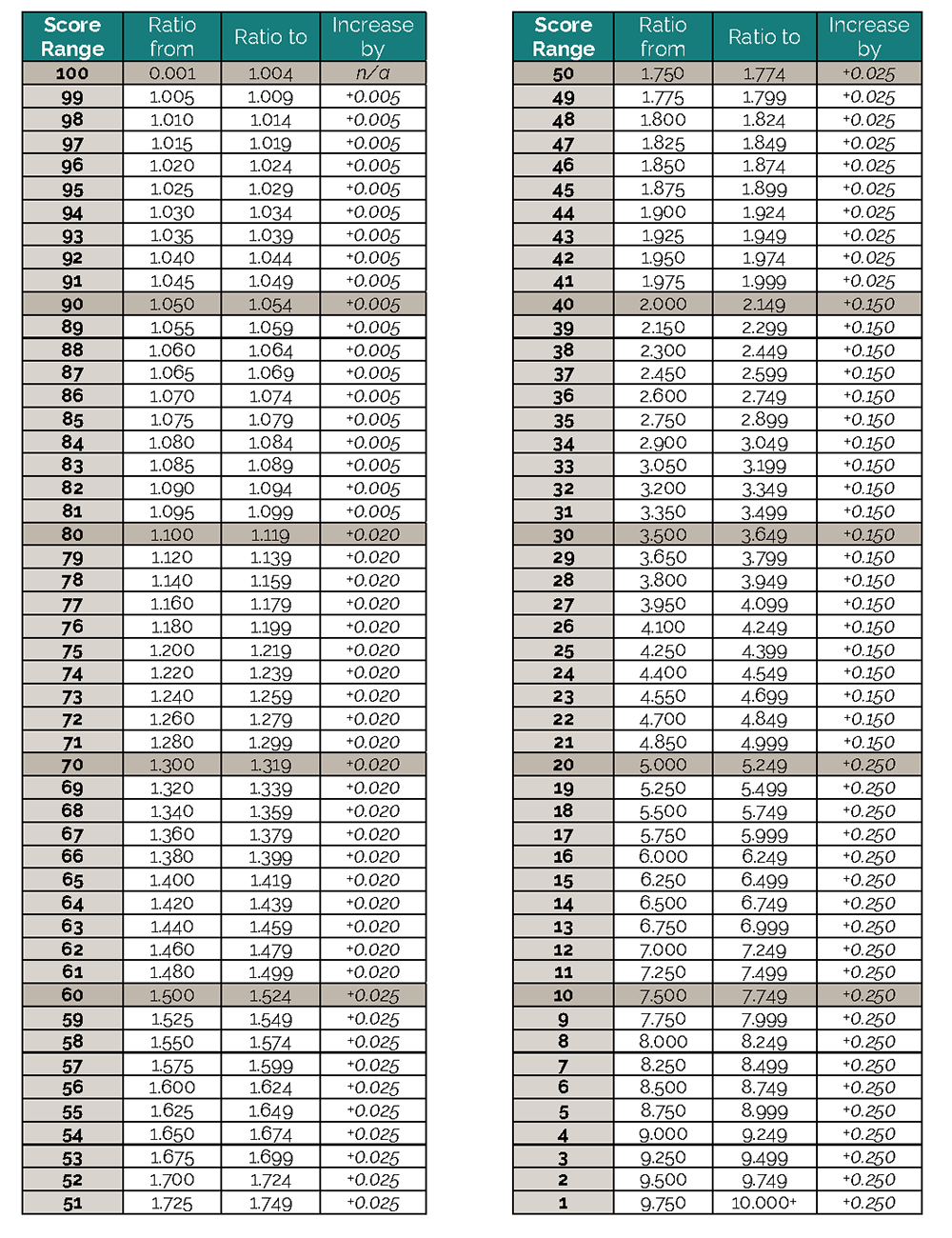