These tools and resources have been compiled by the Census Information Center of Eastern Oklahoma. If you have questions or need help locating specific data, please email Isaiah Persson, Community Service Council’s Director of Data & Research. 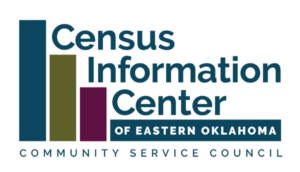 Quick Facts
Statistics for all states and counties, and for cities and towns with a population of 5,000+

U.S. and World Population Clock
Population estimates based on a series of short-term projections

Data Visualization Gallery
Historical changes in the growth and redistribution of the U.S. population

Economic Statistics
Economic data by industry or by topic

Employment Data
State of the nation’s workforce, including employment and unemployment levels

Interactive Maps
Interactive mapping tools from across the Census Bureau